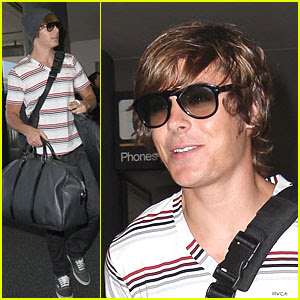 Zac Efron keeps it casual with his beanie look as he arrives at LAX Airport in Los Angeles en route to Canada on Thursday.

Zac will be in Toronto for the Toronto International Film Festival, where his movie Me and Orson Welles will be premiering.

The 20-year-old Disney star is also getting ready for the opening of High School Musical 3 on Oct. 24.

Lucky fans of HSM have a chance to win four tickets for themselves and family/friends to attend the Los Angeles premiere on Oct. 16 at the Galen Center basketball arena at the University of Southern California. Hundreds of lucky fans will win and walk the red carpet alongside Zac, Vanessa, Ashley and the rest of the gang! You can log onto Disney.com to enter, starting Sept. 5 - tomorrow! Entries are limited to ten per day and will run until Sept. 14.