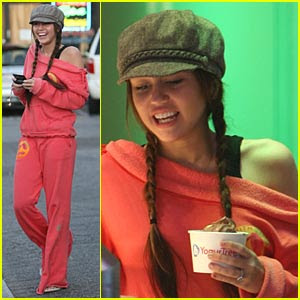 Miley Cyrus dons a pink sweatsuit as she scoops up a frozen treat at YogurTree on Sunday afternoon in Studio City, Calif.

The 15-year-old Disney starlet treated herself to a big helping of frozen yogurt made from organic non-fat milk. Miley was accompanied by a red-headed female friend, her momager Tish and younger sister Noah, who is already looking so Hollywood with her oversized shades!