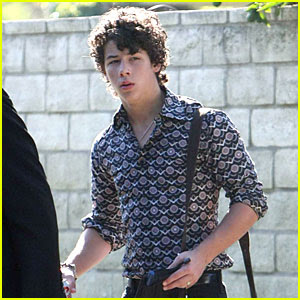 Nick Jonas and his bodyguard Big Rob leave the Jonas home and head to a studio in Burbank, Calif. on Wednesday.

In order to mix things up a bit, the 15-year-old rocker is contemplating about writing songs under an alias!

“Maybe one day I’d write a song and somebody would sing it and then no one would really know that I wrote it,” he said. “It would be kind of exciting, and I had heard that Prince did that, and it was just kind of a goal for me.”

For a peak of the Jonas Brothers‘ VMA performance set, check out MTV Buzzworthy!