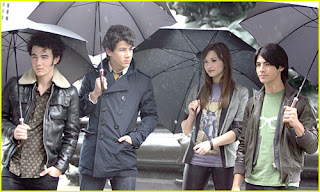 The Jonas Brothers team up with Demi Lovato to shoot some stills for an album cover while in London on Tuesday.

After 2008 MTV VMAs host Russell Brand made fun of the Jonas Brothers for their purity rings, they paid a visit to Radio 1 in London and responded with grace, having nothing negative to say about the comedian despite his jokes.

After their visit to Radio 1, the brothers met up with Demi Lovato for their photo shoot. The photo shoot took place around Soho and the World Famous ‘Eros” Statue.