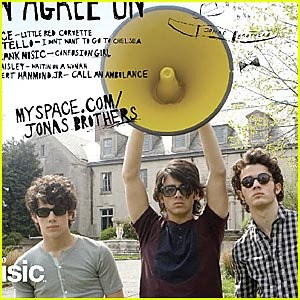 The Jonas Brothers are one of three artists featured in an outdoor billboard campaign for MySpace Music in New York City’s Times Square. (MIA and Lil’ Wayne are the other two featured artists.)

If you see this billboard in Times Square, snap a photo of it and send it on over!

Other pictures include Nick Jonas and his pet pooch Elvis earlier today. The 16-year-old Jonas Brother reportedly took the pup to a Los Angeles vet surgery, after discovering the cute puppy had ticks.