A Walk To Remember Miley Cyrus 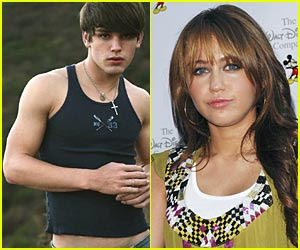 Miley Cyrus will star in a new Disney film based on an upcoming Nicholas Sparks novel, reports Variety.

The 15-year-old Hannah Montana star hopes to create a movie like Mandy Moore’s A Walk to Remember. Miley won’t sing but only act in the drama that touches on family and romance. Her momager Tish will be act as executive producer.

Check out the video below of Miley hanging out with underwear model Justin Gaston last night at Universal City Walk in Hollywood. The pair was chaperoned by Tish.

Miley, 15, and Justin, 20, were first spotted at church together this past Saturday. On Monday, the twosome were spotted at L.A.’s Century City mall. According to E!, the happy couple got out at the valet stand on Santa Monica Boulevard and walked through the mall, “holding hands the whole time.”