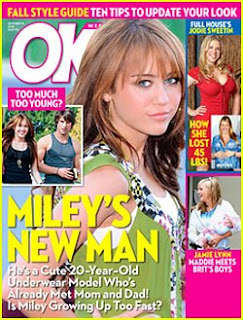 “Miley and Justin were really playful with each other,” an eyewitness at the evangelical church tells OK!. “And for being with her parents, they were extremely touchy-feely. Miley had her hands on Justin’s stomach. They definitely seemed like a couple. Her parents, Billy Ray and Tish, really gave them space.”

Billy Ray, who is a host on Nashville Star, reportedly took Gaston under his wing, eventually introducing him to Miley three months ago, in June.