Selena Gomez is Another Cinderella Story 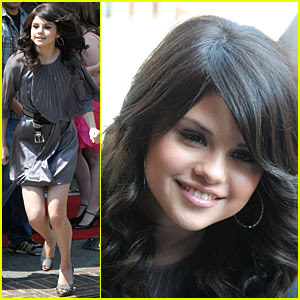 Disney starlet Selena Gomez (in BCBG) attends the premiere of her straight to DVD movie Another Cinderella Story at the Grove Pacific Theaters in Los Angeles, Calif. on Sunday.

The 16-year old actress stopped to speak to reporters and posed with fans on the red carpet!

Co-star Andrew Seeley was also on-hand for the festivities.

Directed by Damon Santostefano, the film has a target release of Sept. 16.

The film (via IMDB) is about a guy (Seeley) who dances with what could be the girl (Gomez) of his dreams at a costume ball and only has one hint at her identity: the Zune she left behind as she rushed home in order to make her curfew. And with a once-in-a-lifetime opportunity in front of him, he sets out to find his masked beauty.