The Jonas Brothers are British Boys 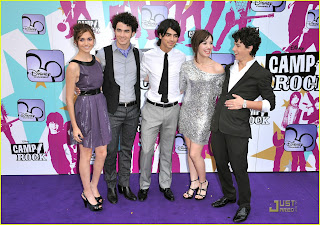 The Jonas Brothers walk the purple carpet at the European TV premiere of their new movie, Camp Rock, held at the Royal Festival Hall in London, England on Wendesday.

Camp Rock premieres on Disney Channel UK and BBC One (Terrestrial Premiere) next Friday on September 19, 2008

Joe, Nick and Kevin and costar Demi Lovato are all expected to appear in the sequel to Camp Rock. And according to Hollywood Reporter, the Bonus Jonas Frankie (their youngest brother) is also sent to make an appearance.